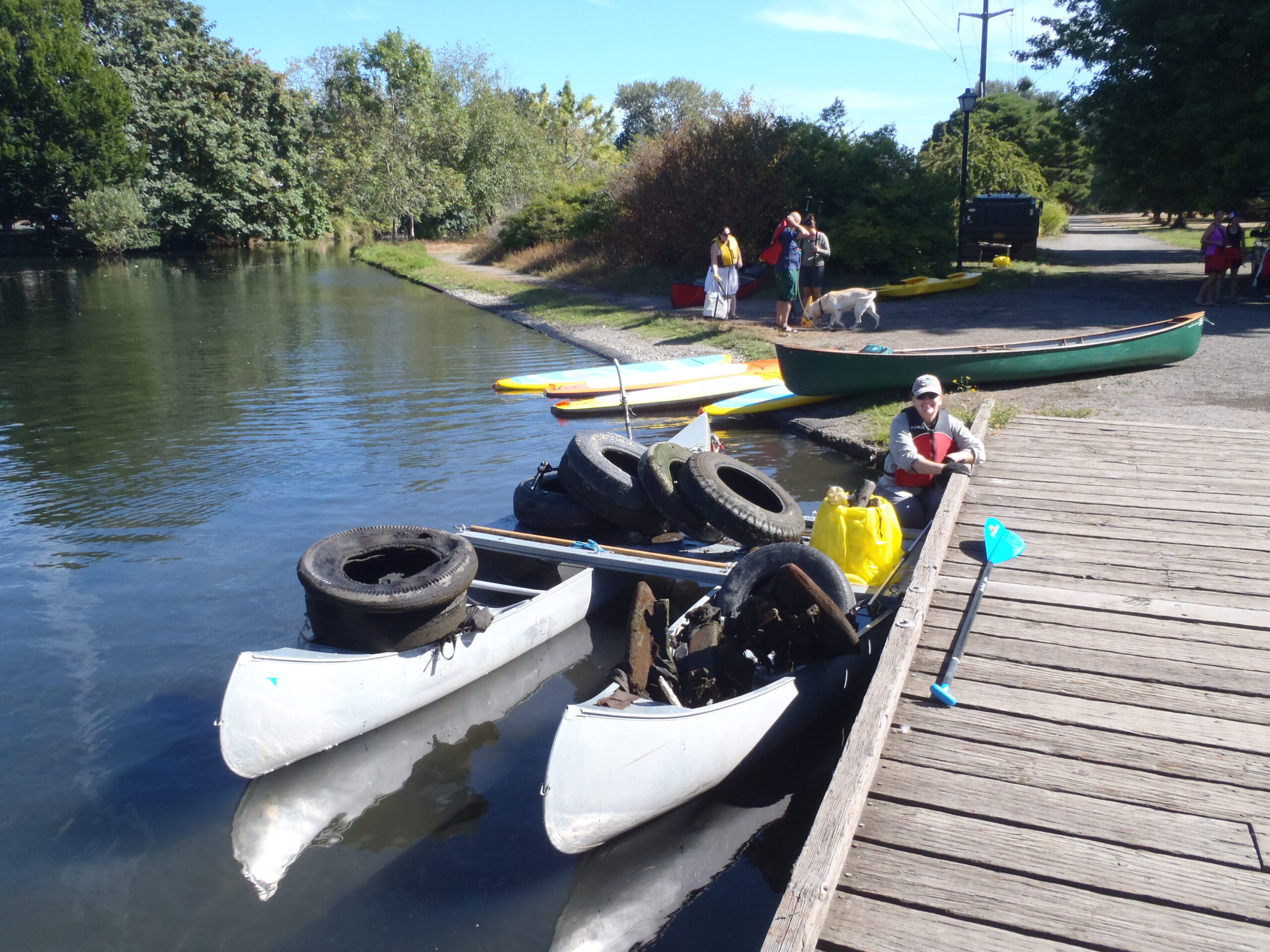 This week panned out to be a perfect one for getting some long awaited maintenance done. As you may know, the 2 1/2 mile waterway is a lot to cover, so we try to appreciate it a bit at a time.

Monday – Putting in at the D Street boat ramp in Springfield there is a large eddy about 30 yards upstream. It is is just above the Canoe Canal intake. It had plenty of garbage to pick out, driftwood and a pretty large, dead fish. Paddling in a canoe made it a fun challenge to break up the wood. This freed up the trash to be able to pick it up. Sandals, bottles, the usual inventory, but today there was a nice quality, Extrasport PFD. Sometimes it pays to do the right thing! Additionally, there is a shopping cart in the middle of the river that will likely stay there until we can organize and get a group to remove it.

Tuesday – Paddling the Lower Waterway of the Canoe Canal to assess the needed attention was the focus for today. Now that we have moved our rental location above the Lower Waterway we have been focusing on the health and beauty of what’s above/upstream. Due to a general lack of attention, the lowest section of the waterway has a need for some volunteer cleanup. There is a lot of trash, and a number of spots where unhealthy scum is collecting. The algae bloom is not helping because it collects these items and scum. UPDATE: 2/8/22, The plan is to have a cleanup event in Mid May to address this!

Wednesday – Today was a hot one. So getting on the water early was the strategy. First off I filmed a video showing off some basic tools for cleaning up a waterway. Here’s the link

After 2 hours collecting small items I got back to shore and took inventory. It turns out that I collected 55 socks that were underwater! Also, 15 tennis balls of various states of decay, broken glass, rusted tin, and other nasties.

Thursday – One of the unique features of the canal is the dam. People portage boats around the dam quite often. It’s a great way to extend your paddling tour! We added the 7th, 8th and 9th bucket of gravel to the sink hole (large and low depression). This is to improve the footing while carrying boats. It’s right next to the water and now it is easier to launch a boat. Additionally, time was spent with the picky-uppy tool to collect a pellet bag worth of trash. Mostly styrofoam bait containers, broken glass, and a few lonely sandals. The water around the bottom of the dam has interesting hydraulics that tend to gather floatable items.

Friday – Focusing on the removal of Himalayan Blackberry plants on shore. At our new rental location there used to be an abundance of blackberry plants. Spending down time trimming and digging these out created this pretty large pile. It’s leather glove work that has some challenge involved. Now the native Ash and Willow trees and snowberry bushes are free of the prickly invaders. Don’t worry, there are still an overabundance of ripe fruit vines a few steps upstream! We first noticed this particular spot as a potential rental location in 2016. It was during a Nearby Nature camp when the parking lot was getting resurfaced, we scrambled and decided to put in here. That day we cleaned up the trash pile left by a camper. (See the photo below). Now the dream moving upstream, above the 1st portage and the Lower Waterway has become a reality. We hope you enjoy it as much as we do!